Junca is inspired by the Japanese word 純化 which means purification.

As a CEO and an Aesthetician, Mr. Nagatome devoted years of testing and experimenting with beauty experts to reveal the true nature of beauty.
The answer was quite simple.

The body is made up of 60 Trillion cells.

As long as those cells are moving healthily, the hair and the skin will continue to be full of life.

But nowadays, factors such as aging, depression and allergies can be greatly felt.

The stress and the activated oxygen we feel and intake everyday prevents the natural healing and self cleaning power of these cells.

Junca offers purification, to supply needed energy to the cells to perform their tasks.

For that reason, Junca will continue to pursue the real nature of Beauty.

Junca’s 8 promises for our valued clients

１. Our main goal of styling is not just to give you temporary hair style, but also for the "Lifetime Beauty" too.

2. We will never conduct a service that will damage your hair, scalp or body.

3. The ideal way to set cutting line, hair condition and color, we require you three consecutive treatment with us. We will not conduct any treatment which will be burden to your hair or body.

4. We will continuously discipline ourselves to bring out your hidden charm and natural beauty .

5. We observe ourselves objectively to avoid us to fall in self-satisfaction.

6. We always choose the best treatment for our client, regardless of the trend of the fashion and beauty industry. We are aiming for the satisfaction and happiness of our client.

7. We ask reasonable compensation honestly from our clients for us to maintain the best services. 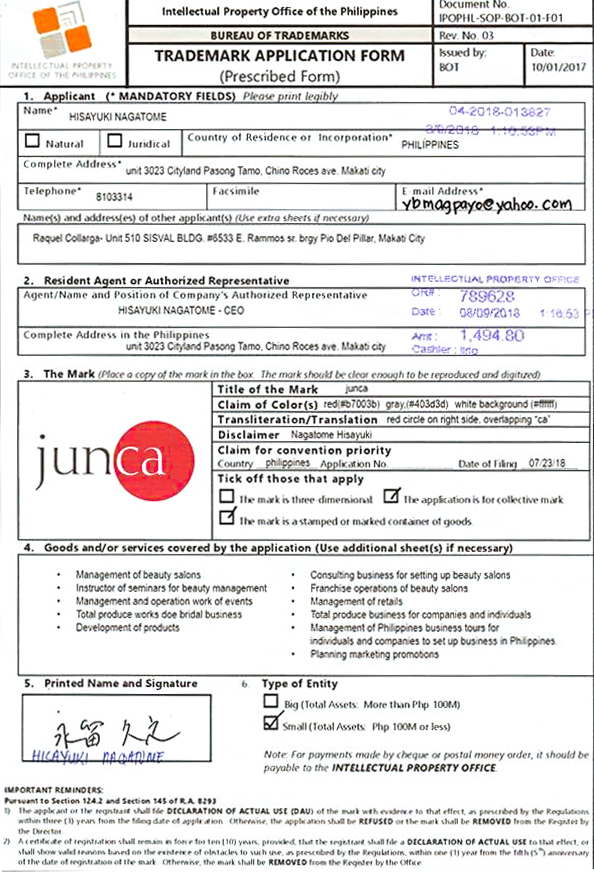 This is the following contents about Junca's logo and Treademark. 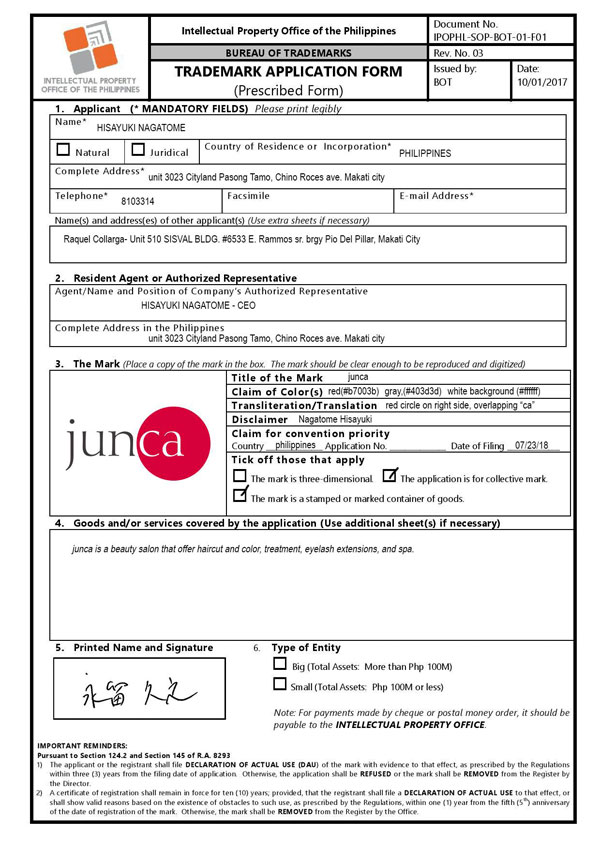 Since Junca Japan has been established, we are continuously improving and developing our services to match the needs of our clients.

December 2009
Junca Japan Inc. was established. While carrying out seminar and event productions, we are preparing for the opening of our Salon.
January 2010
Junca Japan held charity events in the Philippines. Successful development of the Original Hair Color Treatment that protects the brain (Junca System) This was added to the menu.
February 2010
Junca Concept Salon was opened. Facilities like Stone Sauna and professional therapy spa were added to the Salon. The salon was fully equipped with Junca Water. Popularity in the TV and Media soared.
March 2010
Bridal Production Department was established.
June 2010
Aesthetics Department was established. Kyushu’s first Platinum Aesthetics became popular with Media.
August 2010
Started Hair donations. Donated to the Japan Hair Donation & Charity
September 2010
Participated in the Tokyo Collection (Hair and Make up). Ranked No. 1 in the Hair Salon Survey and since then continued to ranked first (Tora Kore Kyushu)
November 2011
Accepted 2 interns from South Korean who received hands on training (First in Japan)
January 2011
Junca SSS, a shop running for a limited period, was opened in Tenjin VIORO Bldg.
February 2011
Grand opening of JUNCA Beauty Label in Tenjin VIORO Bldg.
March 2011
Held the Beauty and Bridal Fair at the 4th and 5th Floor of Tenjin VIORO Bldg.
Junca Beauty Chiropractic department was established. Junca Japan Inc. celebrated its First Year anniversary at Tenjin Le Circ
May 2011
Introduced Candle Aesthetics (Kyushu’s First). Established Kisetsu, an independent Events Management Production company.
June 2011
Started Beauty Seminar and Consultation in China
July 2011
Reopened Junca Beauty at the 4th Floor of Tenjin IMS Bldg.
August 2011
Guest at a Hair Show event at The Peoples Park in Baoding China with over 1000 participants.
September 2011
Accepted 3 interns from South Korea who received hands on training
November 2011
Took charge of the Hair and Makeup of Miss Universe Japan- Kyushu 2012.
April 2012
The Second Salon Junca Japan Saloon was opened. It was a 3 Floor Salon that has Tatal Beauty Salon, Bar&Café and Studio. Started the Food and Beverages Department
May 2012
Provided photoshoot for a major cosmetic maker, US West Coast Movie and Still Photoshoot.

Since established in 2009, we received many request to guest and produce shows outside Japan. Aside from that, we manage hair and body styles for musicians.

Our salon is beginning to be recognized internationally so we try to challenge further improvement of technology.